Nisyros (Greek: Νίσυρος) is a volcanic Greek island and municipality located in the Aegean Sea. It is part of the Dodecanese group of islands, situated between the islands of Kos and Tilos.

Several other islets are found in the direct vicinity of Nisyros, the largest of which is Gyali. The Municipality of Nisyros includes Gyalí as well as uninhabited Pacheiá, Pergoússa, Kandelioússa, Ágios Antónios and Stroggýli. It has a total land area of 50.055 km2 (19.326 sq mi) and a total population of 1,008 inhabitants.

The island is reachable by ship from Piraeus and Kos, and in summer, there are many daily trips from the village of Kardamena on Kos. There is also a heliport. The main town and port of the island is Mandraki . Other villages are Paloi, Nikia, and Emporeios. According to the 2011 census, the municipality’s resident population is 1,008 , although in summer it is augmented by many tourists as well as expatriate Nisyrians who visit the island for their vacations. Tourism is not so heavily developed as on other Greek islands. Deposits of perlite and pumice on Gyali provide much of the wealth of the island. The island used to be self-sufficient, and many crops were grown on its terraced slopes. Today, though, they are cultivated on a smaller scale. 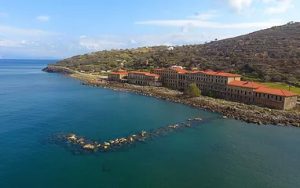 According to Greek mythology, the island was formed when Poseidon cut off a part of Kos and threw it onto the giant Polybotes to stop him from escaping. The ancient name of the Nisyros was Porphyris. Ancient walls, dating from the 5th century BC, part of the acropolis of the island, are found near Mandraki.

It was apparently also a source of millstones used in some of the earliest watermills, being referred to by epigrammatist Antipater of Thessalonica in the 1st century BC.

The island is mentioned by Homer in the Iliad. In Roman times it became part of the Insulae province. The Knights Hospitaller conquered the island in 1315 and built the crusader castle.

Apart from being the capital of the island, Mandraki is also its harbour. It is one of the biggest villages on Nisyros with many available tourism facilities available. Enjoy a stroll around the exquisite pebbled narrow streets and squares (most typical of all being the plateia Delfinion [square of Dolphins]), and take a close look at the white or coloured two-storeyed houses with wooden balconies. The houses are made of volcano rocks and insulated with pumice-stone. The nightlife is not very intense but you will surely have a good time in Mandraki, where there are little tavernas and some bars.

Located 8 km E of Mandraki, Emporios stands out for its houses’ architecture. It flourished during the 20th century when it had many inhabitants, shops (blacksmith workshops, groceries, tailor-shops, coffee shops) and skilled stone makers. During the ‘60s a great part of the population moved to the village seaport, Palloi.

Porta is the main square of Nikia, where the church of Eisodion tis Theotokou [Presentation of Virgin Mary] is located; this is one of the most gorgeous churches of Greece! The square has an ellipsoid shape and pebbled floor designed by Paschalis Paschalakis, a famous artisan of the 19th century, born in Nisyros. Walking through the village, you will find some nice spots looking at the volcano. Nikia is located 14 km SE away from Mandraki. 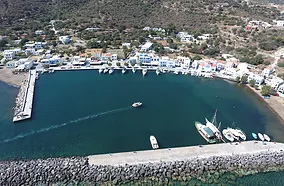 A picturesque fishing village, the port-town of Emporeio, where there are mooring facilities. There you will find the Hippocratic Baths, Panagia (Virgin Mary) ,Thermiane and the “Pacheia Ammos” (Thick Sand) and Lyes beaches, which are perfect for swimming and enjoying ouzo and snacks.

You may walk in the crater and watch the boiling holes. The most recent explosion took place in 1888, shaping a cylindrical pipe of volcano elements, with a diameter of at least 25 m

Close Menu
We use cookies to ensure that we give you the best experience on our website. If you continue to use this site we will assume that you are happy with it.Ok